Didn’t we have a lovely time the day we went to Walberswick? We certainly did! Thank you to all those lovely people who came out on what was a VERY wild and windy night (storm Dennis was giving it his all, and then some) for our first full show as Flitt & Folio rather than The Gluten-free Trio. Deficient to the tune of one in the trio stakes, we nevertheless delivered a two-hour set of spoken word, song, and associated nonsense and even slipped in a couple of skits and monologues along the way to round it all orf. And, OH, the applause! To say it warmed our very cockles would be an understatement indeed; we were moved, Walberswickians, almost to the point of tears by your generous appreciation of our humble efforts.

As usual, we are at a loss for pictorial evidence. If any audience member should have caught us in full flight please do forward any images that show us in a flattering light. We will, of course, give credit where credit is due. In the meantime, Pam has been busy with her pencils and rendered a delightful image of “Dolly and Willy” from the brief Country and Western-themed section of the evening. For those who would like to know a little more about the origins of Dolly and Willy, their bios can be found HERE.

As well as Dolly and Willy, the show also featured songs from R&B legend Dr Nogood and the folky musings of Blob Dylan, as well as a couple of items from Tunbridge Wells’s own Charles and Sara, who felt right at home among the Walberswick dunes. “Even better than Whitstable,” C and S declared, and they should know…

Further adventures in Walberswick beckon, but in the interim we have several other fish to fry including Unfest, the Tunbridge Wells Poetry Festival, a third outing with the Rotherfield Fringe players, and some other bits and bobs yet to be announced. We’ll also be casting our beady eyes around for suitable venues in other Posh Villages – just drop a message in our Contact Us box with any requests and/or suggestions. 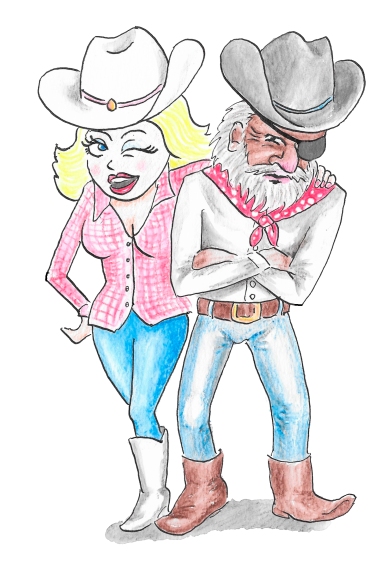